Another year has flown by. Last year I started a tradition of organizing interesting things I've done in the year to prove to myself that it was in fact, a pretty successful year. A lot of times I am unnecessarily hard on myself if there are periods where I have no work and I feel like I haven't been productive at all, but once I finish posts like these it really puts things in perspective. January Formed Atom Bomb Body LLC Technically I did this end of December, but I wanted to include it in this year. Took a big step forming my own LLC in which I could encompass all my modeling, cosplaying, twitch streaming and weird job doing. This has made things SO much easier as far as keeping my personal and business finances separate.

Cos-Losseum Cosplay Con While this con ended up being pretty much a flop, it was my first experience hosting a panel of my own. I also met Nerdofmanyfaces (he was my co-host for the panel) whom became a member of the Brigade, streams himself now and was fun to hang out with at Twitchcon!

I got my hair cut, colored and styled outside my control. (Ok, I got to see a photo of what it "may" look like but this was definitely a 'sure what the hell' moment). I got to walk runway for master stylist Peter Brockt, and his inspiration for our hair was the coral reef. I will say that my hair looked AMAZING and it was my first time doing a hair show, and having extensions. It gave me much more perspective on how much hard work it is to be a hairdresser.

Long Beach Comic Expo It was at this expo that I debuted my Atomic Wonder Woman cosplay. I had first created a version of this when I was younger with parts from Goodwill/Salvation Army, but now being slightly more "experienced" I wanted to bring it back and finish it.

March Video Game Testing Got to test out a very popular video game for a week. Still can't say what it was because it's not out yet and I'm under NDA, but it was really cool getting to play it before anyone else and being a part of the testing process.

April Became A Hype Girl/Posse for a Wrestler So I saw a post on Craigslist from a wrestler named "Guy Cool- The Party Captain" looking for models to shoot promos with him and appear at his matches and I just had to go, "Wut." I absolutely love doing things that are weird or that I think will make a good story, so I reached out to him and since then, I've done about 2 promos and 2 shows with him, LOL. The actual Guy Cool is a really nice and sweet guy. He just has a love for independent wrestling and is a great actor. The matches can be entertaining sometimes. 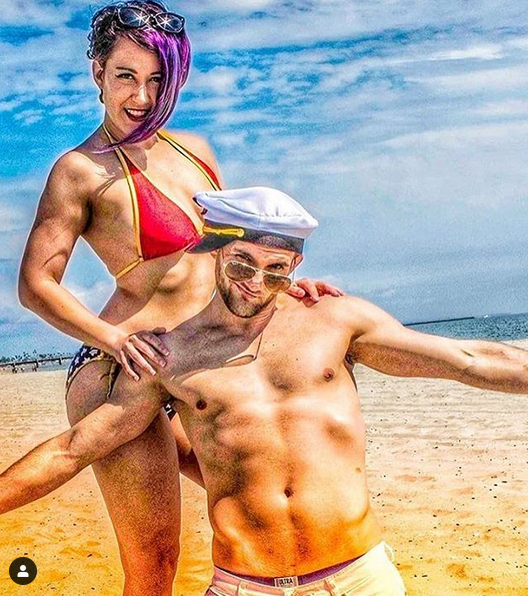 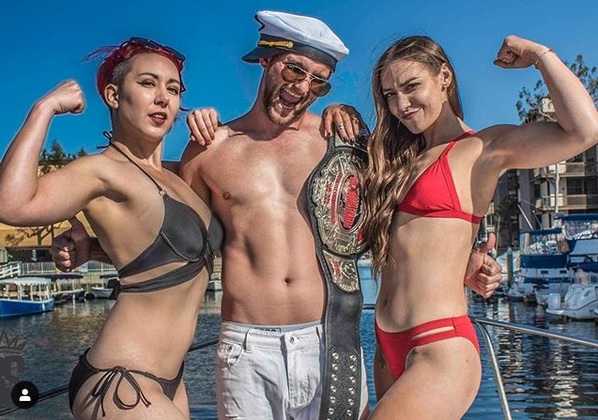 Oro-Con at Feather Falls Casino At the end of April I got my 2nd paid convention job. This one was all the way Oroville (around Sacramento) so I had to fly there, but the pay was DEFINITELY worth it. I debuted my Fallout cosplay here for the first time. This cosplay was one of my favorites to do!

Santa Monica Studios/PlayStation I had the pleasure of getting to be a model for some artists at Santa Monica Studios. It was just practice for them, but still. They wanted a costumed model, so I brought a warrior outfit for them. God of War stuff was EVERYWHERE.

May Human Engine LLC I modeled both nude and clothed for a company that does 3D body scans and uploads them for machine learning, VFX, video game companies and AR/VR. I was there for over 8 hours, it was honestly pretty exhausting but a cool experience. I even got to sit on this weird chair that emulated a saddle so that I could do cool horseback battle poses.

Went to Oregon for the first time as part of my Colossus Girl Mascot gig. Also got to meet another cosplayer for the con - Meadowlark!

Fallout Themed Photos and Engagement Photos The awesome Singledadcosplay/Pointblankshotphotography/Rus took probably the best cosplay photos I've ever had as of yet. I ended up using the photos of myself and GeneralXTL for our "Save the date" cards. We did this shoot at a place he suggested, an abandoned Nike missle silo site.

Featured Again By Fallout Social Media Pages This one came as a total surprise, considering the non-convention photos I had on my IG, that they decided to pick this one. Still was pretty cool though! It was at this con that I got to meet a bunch of other Fallout cosplayers. (If you remember last year around December, they featured one of my Fallout vault door ornament crafts).

E3 Last minute got hired by Ubisoft to be a backup cosplayer at E3 (this too, was a job I found on Craigslist). They were promoting Watch Dogs: Legion and Rainbow Six Siege. Basically I got paid to sit around for a couple of hours in the morning to make sure the other people showed up, then got to walk around and explore/play games for the rest of the day! I got to test out Gears 5, Borderlands 3, watch exclusive (at the time) in game demo of Cyberpunk 2077 and more. I need to get myself another job to get back in next year!

South Bay Festival of the Arts Had a photo of me (taken by Sararrice) appear in a gallery and it ended up being purchased!

July Anime Expo Walked for h.NAOTO at the Anime Expo. It was poorly run and things were so last minute and unplanned, you can read more about my experience here, but still worthy of noting on this blog post.

Bring It Up Pilot Filming I got to be a part of a big network un-aired pilot filming to see if the show would be interesting enough to be on network TV (I honestly love the idea of it). Premise is to bring weird items to the show and talk about it with celebrities. I had my Nicholas Cage bikini and got to stand next to Ryan Stiles (Who's Line Is It Anyway). He even touched my shoulder, and asked what my name was. :O Other weird things people brought: Part of a babies umbilical cord, part of a long diseased cat's tail, a painting an ex gave them that was actually a painting of them with someone they were cheating on, a purse made of chicken wings, etc.

August Buzzfeed I did filming for a Buzzfeed video, "Two Truths and a Lie" about first date horror stories. I honestly didn't think ours would go through because I didn't think we were interesting enough, but several months later I came across it on Youtube! This experience also taught me the importance of NOT READING THE COMMENTS. The internet can be such a mean place.

Fuck University I modeled naked for a sex education video series. I appear in the video a couple of times, as "staff" (talking randomly with someone, and in the "staff photo") and as a "model" (standing naked with other people). It was the first time I've stood around naked DUDES btw, other than people I've been in a relationship with. All I could think was, "DONT LOOK AT THEIR PENIS." They are hoping to get the funding so you can support them here: https://www.indiegogo.com/projects/fuck-university-today-s-sex-education--2#/

Twitch LA Meetup Decided to go outside of the house but I didn't want to do it alone, went with Shloop_Dog and Delphin714, had a great time, met new people and learned things! Only increased the hype for Twitchcon.

September Twitchcon! This was one of the most fun experiences I've ever had. While last Twitchcon was fun, this one was amazing simply for the fact that I actually had people I wanted to see this year. That and we shared a hotel room with Shloop_Dog, and one of the nights we had people over to play some Smash and Mario Party. Looking forward to booking and AirBnb for next year as the group grows!

October I got Married! I'm told this is kindof a big deal. General and I got married at Waimanalo Beach on Oahu. We stayed there for 2 weeks, it was General's first time going to Hawaii so I got to do a lot of fun touristy things with him. This included a circle island tour, ziplining, ATV riding, hiking. SO MUCH STUFF. I'd love to go to another island with him sometime. I have a husband now. Wut.

November Blizzcon I wasn't sure what this Blizzcon would be like in wake of the whole China protests and slight sketchy buisness practices Blizzard has been up to lately, but I got to go for free, so I was gonna go anyway. Plus there were hints that this might be the Blizzcon where Diablo 4 was announced. Sure enough when I made my way inside for the opening ceremony, there were mysterios red computers turned off so that pretty much confirmed it for me. Being a single person at a con does have its advantages, I was having trouble finding a seat but I managed to find a spot near the front and center. It was a few minites later though, when the guy next to me asked what media out let I was from, that I realized I was in the press section. He told me it was cool though, he wouldn't tell anyone haha. Overwatch 2 and Diablo 4 were announced at this Blizzcon and I got to demo both! This was probably my 2nd favorite Blizzcon, first favorite being the first one I ever attended. Just sucks that my husband had to go to the crappiest Blizzcon ever, lol.

Puff Pass Paint I modeled for a 420 friendly painting class. It was instructed, so the teacher made attempts to help the party goers learn how to paint but everyone was pretty much too high and giggly to care. Plus, one couple brought a giant cheese and crackers plate for themselves. That was pretty epic.

December Brigade Gingerbread Xmas Party Some people might not consider this a, "big deal" to add into the yearly highlights, but it was for me! This was the first time having company over since we moved in, I've always been self conscious about the house because its always in a constant state of "half ass", with partially completed construction projects all over the place. It ended up being a really great time and made me want to have friends over more often!

Featured on Dremel's Instagram Page This one came as a surprise. This video was several months old but Dremel commented on it asking if they could share it on their social. What was a little annoying was that they wanted to use it to promote Yaya Han's new cosplayer dremel kit (???) but whatever. My Yaya Han overpriced rant is meant for another time, another blog post.